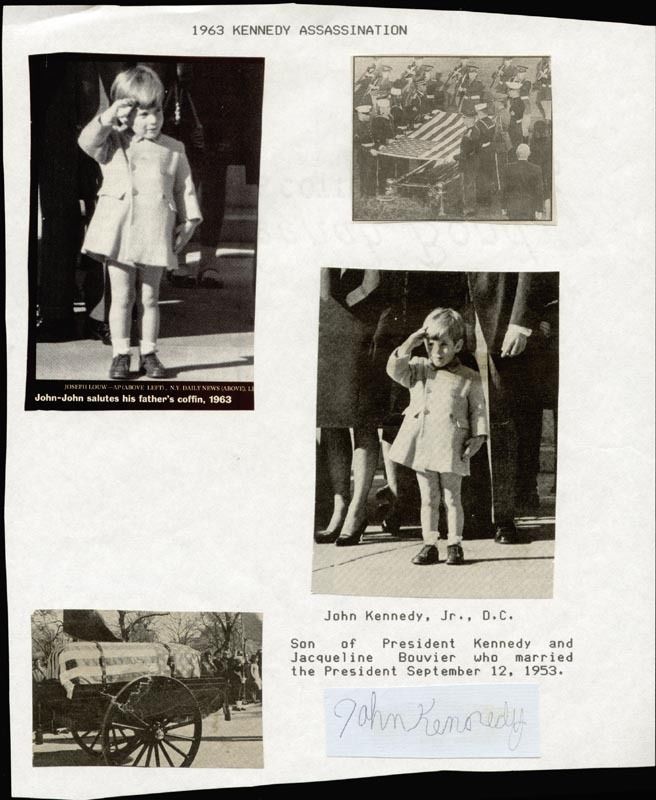 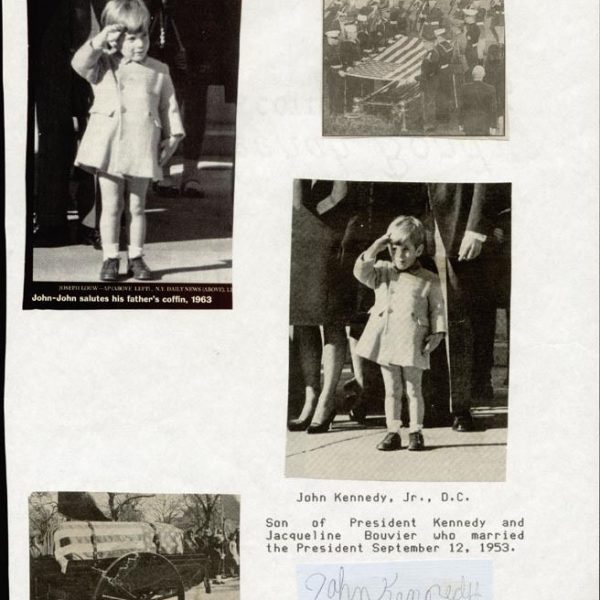 
John F. Kennedy Jr. One OF The Earliest Signatures To Market Documented COA

JOHN F. KENNEDY, JR. Comprises: (1) Early Signature:”John Kennedy” in pencil, 2½x¾ irregularly cut. (2) and (3) Newspaper photos of John F. Kennedy, Jr. saluting the flag draped casket of his father, 2¾x4¼ and 2¾x3¾. (4) Newspaper photograph of President Kennedy’s flag draped casket, 2¾x1¾. (5) Newspaper photograph of President Kennedy casket being lowered at his gravesite in Arlington National Cemetery, 2½x2. Each is affixed to a 9½x7¾ sheet with two loose-leaf holes at left edge. Typed caption. Born in 1960 to President-elect and Mrs. John F. Kennedy, John Fitzgerald Kennedy, Jr., known as “John John”, had captured the hearts of a stricken nation on his third birthday, when he saluted the casket of his slain father. Following his public appearance at the dedication of the Kennedy Library, the “crown prince” of America’s “royal family” kept a low profile until he received a standing ovation at the 1988 Democratic National Convention, when he introduced his uncle, Massachusetts Senator Edward Kennedy. Long courted as a political contender, JFK, Jr. turned to journalism instead, founding the political magazine “George” in 1995. The following year he married Carolyn Bessette, whom he had met in 1994, the year Jacqueline Kennedy died. On July 16, 1999 yet another tragic chapter was added to the Kennedy legacy when JFK, Jr., his wife and her sister, Lauren Bessette, were killed when the plane he was piloting crashed into the sea off Martha’s Vineyard. They were on their way to the wedding of Rory Kennedy who had been born six months after her father, Robert F. Kennedy, was assassinated. Slightly creased at upper left corner. Fine condition.