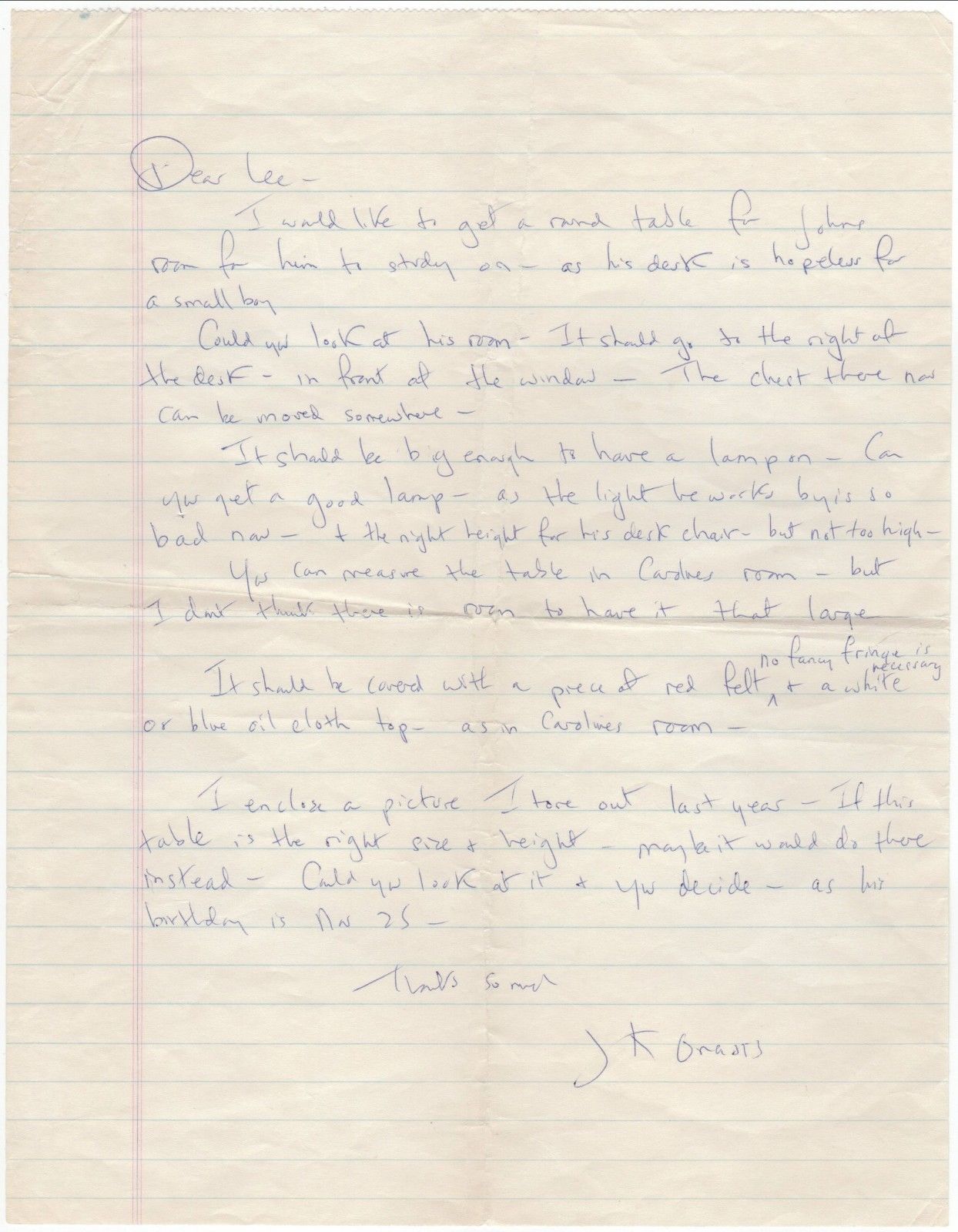 Jacqueline Kennedy autographed letter signed re a round table for John

Autographed letter signed “J K Onassis”. 1p., 8.5 x 11.0 inch. N.p., n.d., penned on a lined sheet, Jackie writes to her interior designer, Lee Onthank Barrett, regarding the procurement of “a round table for John’s room for him to study on – as his desk is hopeless for a small boy.” In full: “Dear Lee – I would like to get a round table for Johns room for him to study on – as his desk is hopeless for a small boy. Could you look at his room – It should go to the right at the desk – in front of the window – The chest there now can be moved somewhere – It should be big enough to have a lamp on – Can you get a good lamp – as the light he works by is so bad now – + the right height for his desk chair – but not too high – You can measure the table in Caroline’s room – but I don’t think there is room to have it that large. It should be covered with a piece of red felt, no fancy fringe is necessary, + a white or blue oil cloth top – as in Caroline’s room – I enclose a picture I tore out last year – If this table is the right size + height – maybe it would do there instead – Could you look at it + you decide – as his birthday is November 25 – Thanks so much”. An integral player at the internationally renowned Manhattan interior design firm Keith Irvine and Thomas Fleming, Inc., Barrett worked with Jackie after her departure from the White House. He was also employed by other family members, including Ted and Joan Kennedy, Patricia (Kennedy) Lawford, Eunice and Sargent Shriver. Letter is accompanied by a vintage catalog clipping, featuring a desk that Jackie uses as reference in her description. Minor fold breaks partially expertly repaired on verso, some light surface wrinkling, else good condition.

COMES WITH A CERTIFICATE OF AUTHENTICITY BY ANDREAS WIEMER HISTORICAL AUTOGRAPHS. Please do not hesitate to contact me with any questions.

I started collecting autographs of famous personalities as a teenager in 1985. During the last 15 years I’m specialized in buying and selling rare historical autographs, documents and manuscripts. My large reference library includes all the standard works with more than 100 books on the subject. I’m a member of all major autograph organizations and the author of several published articles and reference books incl. the standard works: “John F. Kennedy – autograph study” and “Presidents of the United States – AUTOPEN GUIDE”. My slogan has always been: “Think inversely”. Before you purchase an autograph you should think along the lines that it is not genuine, then do your research hoping to prove otherwise.